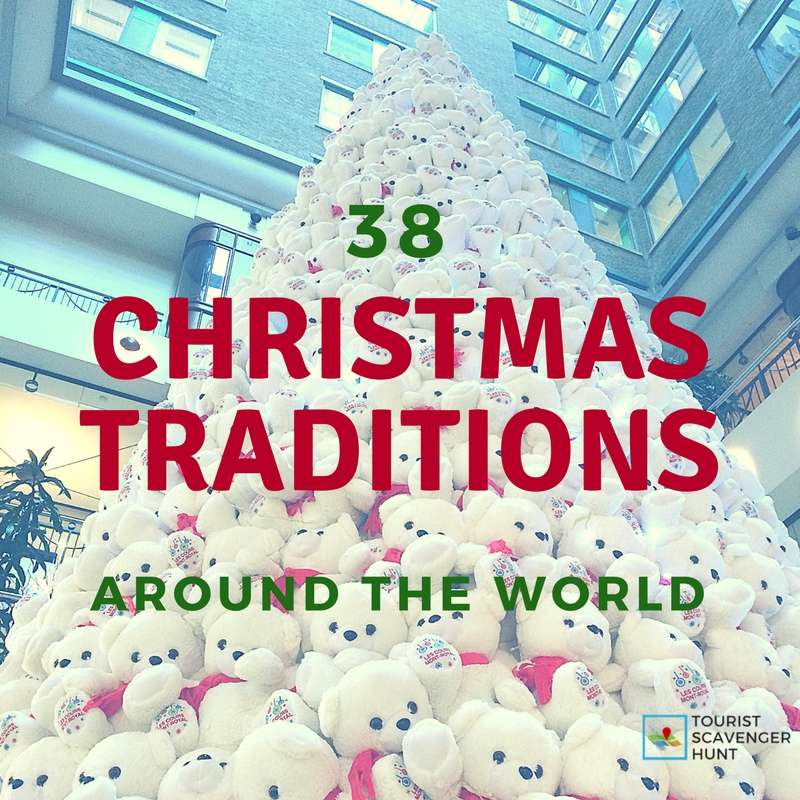 Did you know that most countries have their own unique Christmas traditions? What traditions do you maintain?

Let’s have a look at 38 Christmas traditions around the world.

In Austria, to keep children in check, parents tell them of St. Nicholas’ evil accomplice, Krampus, who roams the streets at night to frighten and punish bad children.

In Bolivia, people bring their rooster to Christmas Eve mass because the rooster was the one who announced the birth of Jesus in the nativity scene. Imagine the noise.

Canada is the world’s largest exporter of natural Christmas trees.

In Toronto, in front of City Hall at Nathan Philips Square, the holiday season is kicked off with the annual Cavalcade of Lights, more than 300,000 Christmas lights and spectacular fireworks.

Santa Claus resides at the North Pole, which is in Canada’s great white north. Children from around the world send him their letters each year: Santa Claus, North Pole, Canada, H0H 0H0. Canada post will deliver them, each will receive a response.

The city of Changzhou erects an annual Christmas tree made from beer bottles.

Dia de las Velitas (little candles’ day) marks the beginning of the holiday season in Colombia, in honor of the Virgin Mary. People place candles in paper lanterns in their windows or balconies.

In the Czech Republic, Christmas traditions include unmarried women standing by a door to throw a shoe over their shoulder. If it points towards the door when it lands, they will get married in the next year.

Denmark exports the most Christmas trees within Europe.

On Christmas Eve, Estonian families go to the sauna together.

In Finland, people light candles at the graves of their departed loved ones.

The Christmas pickle is a 150-year old tradition in Germany. Most families hang one in their Christmas tree.

Another of Germany’s Christmas traditions is that Saint Nicholas travels by donkey to leave treats (coins, chocolate, oranges and small toys) in children’s shoes all over Germany. He also visits homes and schools and exchanges gifts for a poem, a song or a drawing.

As in Austria, in Germany Saint Nicholas has an evil accomplice called Knecht Ruprecht who looks like a devil, carrying a small whip or stick to punish bad children.

In Greece, the Kallikantzaroi, evil goblins, wreak havoc in the 12 days before Christmas.

In Greenland, it is customary for Christmas dinner to include Mattak (raw whale skin) served with blubber, as well as Kiviak (500 dead auk birds stuffed into a seal skin and left to ferment for 7 months).

In Iceland, children place their best shoes by the window for the 13 nights leading to Christmas. The Yule Lads, 13 tricky tolls, will leave either gifts or rotting potatoes in the shoes, depending on whether they’ve been good or bad.

Another of Iceland’s Christmas traditions is the Yule Cat who stalks the hills. Children who don’t receive new clothes before Christmas Eve will be devoured by the Yule Cat.

In Italy, Befana, a friendly witch delivers sweets and toys to children rather than Santa Claus.

In Japan, Christmas isn’t an official holiday, but people still celebrate a little. One of Japan’s Christmas traditions is eating Kentucky Fried Chicken (typical American food), which must be ordered months in advance! The bucket comes with cake and champagne.

Christmas cards are also exchanged; however, none are red. Red is a colour reserved for funeral announcements.

Children open presents left for them in their shoes by Sinterklaas.

In New Zealand, rather than decorating a conifer, they decorate a Pöhutukawa tree.

In Norway, families hide all their brooms and cleaning equipment as Christmas traditions include believing evil witches will steal them on Christmas Eve.

In San Fernando, the Saturday before Christmas Eve is held the annual Giant Lantern Festival. Lanterns can measure up to 6 metres!

In Poland, families gather for the XMAS feast, a 12-course meal, on Christmas Eve. One of Poland’s Christmas traditions is to place iron under the table to ensure strong legs.

In Portugal, one of the Christmas traditions of Consoda is the morning feast on Christmas day, a time for remembering the dead. Families lay places for the souls of the late loved ones.

In Serbia, children open their gifts 2 Sundays before Christmas Day.

Oil-fried emperor moth is a regular staple around Christmas time in South Africa.

A weird tradition in Spain is to include a “caganer” in their nativity scene under their tree. The Caganer is a figurine or character who has dropped his pants to leave a special surprise.

A common tradition in Sweden is to include a rhyme on the outside of presents on the wrapping – it adds a personal touch.

In Gävle’s Castle Square, a 13-metre-tall Yule Goat made of hay is erected annually during Advent. This is a recent tradition as it began in 1966. It has been burned down 29 times since then (until 2016).

Another of Sweden’s Christmas traditions is the festive rice pudding in which is hidden a peeled almond. Whoever finds it will marry in the next year.

In Ukraine, the Christmas tree is decorated with artificial spiders and webs.

Every member of the family must stir clockwise the Christmas pudding before it is cooked. They must make a wish as they stir.

Children receive gifts in their stockings, or a lump of coal if they’ve been bad.

A giant 9-metre Menorah is lit annually since 1979 on White House grounds in Washington D.C. to underline the Jewish holiday of Hanukkah which occurs around the same time as Christmas for Christians.

In Venezuela, Christians go to Christmas Eve mass in the morning on roller skates. On this day, roads across the city are closed to cars so people can travel safely to church. Christmas dinner consists of tamales.

The “20 Christmas Traditions Around the World” infographic was originally published on DailyInfographic Dec.15th, 2017.